Just finished cutting a 5-minute film, an interview with my friend Carina Fearnley about her experience of traumatic brain injury following a car accident last year. We are entering the piece in a competition organised by the charity Headway.

Credits for sound from free sound.com:

After shooting the PGB Gitlin Baker Solicitors video, I was asked by Alex Hearn of the creative agency The Big A to help him solve a visual problem he was wrestling with. He had developed the PGB Gitlin Baker website and he was designing a video brochure (consisting of print material and an HD video player built into the actual brochure) for the Moroccan artist Ghizlan El Glaoui, whose paintings are very hard to describe. Ghizlan installs LED light panels behind the canvas and paints in order to allow the backlight to illuminate through the painting in low ambient light. So as a room gets darker in the evening, for instance, the painting glows from within… but does that description say anything about how engaging Ghizlan’s work is? Not at all.

Alex and I spent an afternoon with Ghizlan in her Chelsea studio and at one point it went darker as clouds passed across the sun. Her canvases, which appeared as just painted surfaces in full daylight, were now glowing from within but you could still see the painted image.

A short video showing this transition is really the only way to understand Ghizlan’s work. But it was a tricky technical exercise to simulate room light changing as if from day to evening while gradually increasing the intensity of the painting’s internal light. With the help of a Juggler Lighting Desk (massive thanks to Angus McDonald of Cordis Video) and a lot of practice working the Juggler with one hand and the painting’s remote control with the other, we got the result Ghizlan needed for her video brochure.

Alex Hearn and The Big A can be found here:

Earlier this year my good friend and formidable London solicitor Ian Baker told me he was setting up a new law firm with his colleague Miriam Gitlin. We talked about photography for the new website and I suggested a short video to take the place of traditional stills headshots and text. Ian saw the value of it right away. I shot a similar film a couple of years ago for my brother-in-law and Bath, UK estate agent, Kit Johnson. We wanted people to see and hear who they would be dealing with, as close to a conversation as possible. Potential clients see Ian and Miriam talking about the new venture and their desire to work differently in the legal sector.

2015 has been really interesting with some great work and projects. Time to catch up on it here before the end of the year, it’s been way too long since my last post…

Nepal’s first earthquake in April this year struck five days before we were meant to be in the Far Western Development Region shooting a short film for Eneco, the Dutch energy company. Eneco’s partner organisation in Nepal, SNV Netherlands Development Organisation, evacuated all of their staff from Kathmandu. My old friend and expedition leader Dan Mazur www.summitclimb.com was pinned down at Camp 2 with clients on Mt. Everest, tweeting from a sat phone and making headlines in British newspapers because there were so few sources of real time news from Everest. All climbers were evacuated safely from Everest and the mountain was shut.

Two weeks later, thinking our film work had been cancelled, SNV got in touch with Mark Meyrick, my friend and Eneco client, saying their staff were back in Kathmandu, the rainy season was reasonably dry so far and let’s shoot. We arrived in Kathmandu and many public spaces were tented camps but we were glad to see that people seemed to be recovering.

The film documents efforts to manufacture and distribute improved wood-burning cookstoves in the poorest area of the country, Far Western Development Region. The stoves burn less wood and emit less smoke, replacing traditional mud stoves, resulting in reduced respiratory problems and reduced deforestation. The quakes had not affected this region and that is fortunate because here, as in affected areas closer to Kathmandu, relief work would have been nearly impossible in the most remote mountain communities.

Visual Verse is a terrific website that invites writers to submit a piece in response to an image – written in one hour, maximum 500 words. The VV editors, Kristen Harrison of http://www.thecurvedhouse.com/ and Preti Taneja http://www.preti-taneja.co.uk/ asked me to contribute an image from my Extinction series, a tortoise shell labelled ‘extinct’, a specimen in the collection of the Field Museum of Natural History in Chicago, as their inaugural image: Vol. 1, Chapter 1. I’ve worked and – shall we say – conspired creatively with Kristen for a long time. Anything she makes or is into – it’s going to be good, I’m in…

However, I was not prepared for the volume of amazing writing that resulted and how it made me reassess the power of an image and the responses it can inspire. I was reminded that what someone sees in the first moment they encounter an image and what that means to them can lead to an infinite range of responses – 42 of them are in Vol. 1, Chapter 1. The poet Andrew Motion contributed the lead piece and it went from there:

Andrew also contributed the lead piece to my next contribution, a very different image:

Just back from Dhaka where we were shooting a short film on the work of World Child Cancer, a UK charity that twins their network of international hospitals and volunteer specialists with teams on the ground in the developing world. We were shooting in the paediatric oncology unit in the Bangabandhu Sheik Mujib Medical University (BSMMU), a huge hospital in the centre of Dhaka.

I was totally unprepared for how much I loved the city. I guess because it’s not a huge tourist destination, Bangladesh has not been on my radar. The everyday crowded insanity and street theatre is what you find in any subcontinental city but the people are very welcoming, really warm and they like having photos taken – again, probably because it’s not a huge tourist destination.

For last week’s Photography Show at the NEC in Birmingham, Emma Taylor of Creative Advice Network asked me to join her and Martin Homent, creative director at TBWA, for a series of short portfolio reviews on the last day of the show. This turned into an open discussion between us and several photographers – ‘Ask Me Anything’, as Emma put it – on how to access creatives at ad agencies. My part was to discuss the making of portfolios – editing, sequencing, printing and construction.

As the discussion got going I realized that Matt and I, at MPrint, see exactly what a photographer is trying to do to reach their market as we print each page of their portfolio in their intended order – how they get it right and sometimes maybe not. In fact, we might know our clients’ work better than anyone other than the photographers themselves. All of which is fairly obvious but it was interesting to think about it as photographers were asking Martin targeted questions about reaching him and getting his attention at work.

The talk revolved around the best ways to get in touch with creatives and the importance of timing (the kind you can control and the kind you can’t), the importance of social media for a photographer’s profile (Twitter, the rise of Instagram) and how a printed portfolio is still essential. I went in wondering a little how I could contribute to Emma and Martin’s session and left thinking: Emma gets it – our work at MPrint is a lot more than getting ink onto paper. 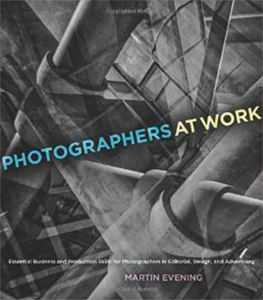 Martin interviewed me last year for his new book, an in-depth look at the industry through, in part, a series of interviews with various professional photographers including my friends Eric Richmond and Jillian Edelstein. We set up here at Plough Studios and the video interview lasted about an hour. Preparing for it required looking carefully at where I am and what I’ve done in 28 years. Martin asked specifically about travel work and shooting on location. I shoot plenty of video interviews but being on the other side of the lens was a challenge, to say the least.

Evgenia Arbugaeva’s feature in The New Yorker on a Russian meteorologist in a remote Arctic outpost is possibly the most perfect photography essay I’ve seen since… well, her series on Siberian mammoth tusk hunters that I saw in National Geographic in April 2013.

Of her subject, she says, ‘He doesn’t get lonely at all. He kind of disappears into tundra, into the snowstorms. He doesn’t have a sense of self the way most people do. It’s as if he were the wind, or the weather itself.’ Very beautiful…

Maybe a photographer needs to be from the place or region she is working in to make images this good and she is – Arbugaeva grew up in Tiksi, a small town in the Russian Arctic. Her website is not huge but the stories there are all amazing.

Thanks to Bob Sacha for posting ‘Weather Man’ on a certain social media site that begins with Face.

OK, for anyone who isn’t into freshwater fishing as much as I am, this is boring but this video is a pretty good example of how incredible the action is in northern Saskatchewan lakes (I am not paid by the lure manufacturer, by the way). At 1:06, check out how quickly the pike turns and hits the lure: